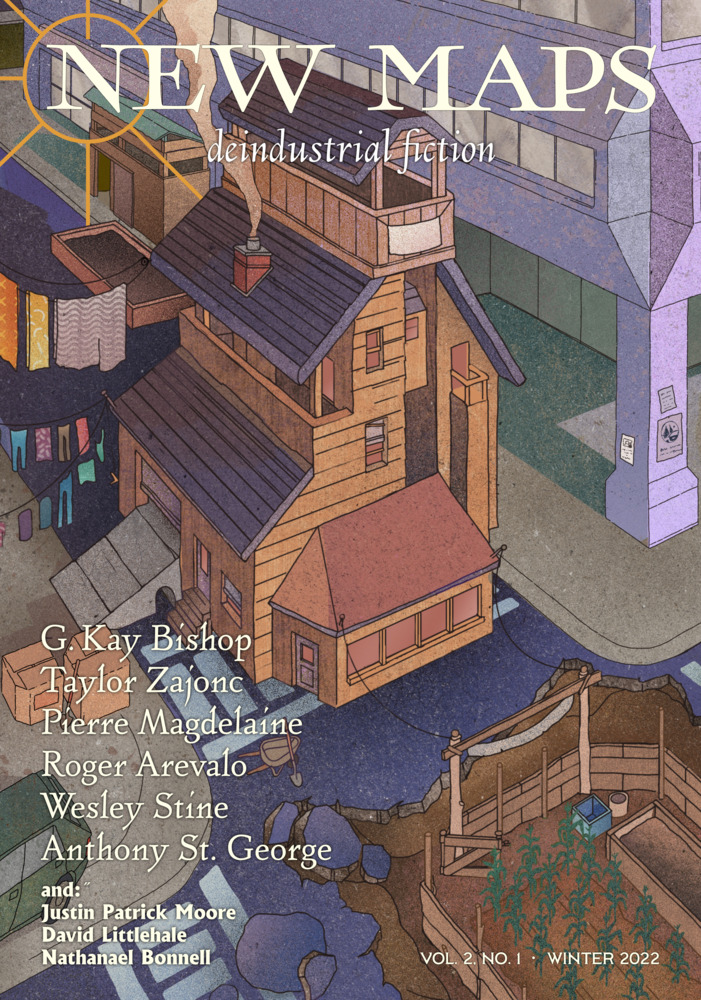 In the midst of the biggest blizzard of the season up here in northern Wisconsin, today I was happy to snowshoe out over a couple feet of snow to get the Winter 2022 issue of New Maps off to the post office. If you’ve renewed or subscribed for 2022, your copy should arrive within about a week (in the U.S.; some overseas copies have arrived already).

If you’re not subscribed, you can order a copy or start or renew a subscription at our Order page, where you can also find the complete 2021 run of New Maps as one package. If you enjoy pressing buttons, and who doesn’t, you can also get to the Order page by clicking this one:

With seven excellent new stories and a new episode of our continuing series, there’s a lot to get into with this issue. This time around, we see how similar starting points can lead to entirely different worlds. Three young people want to leave their communities — but one must contend with a domineering father, one will find her destiny bound up with a strange fairy tale, and another will get a wholly unexpected chance at adventure. Two different stories raise the sobering possibility of a reinstitution of slavery — one following a man on a slave rescue mission, one examining the self-satisfaction of those who hold the power. As well, find the story of an emperor’s meal, told by the chef; and an outing of a bike gang who, in their estimation, are doing the community a great service: all of which also goes to show how much depends on who’s telling the story.

I hoped for a January release for this issue, but instead, I became a father: on December 26th my and Misty’s son Ivor was born, and life here chez Looseleaf Publishing has taken some time settling back into a more-or-less stable state. So if you think you might like to write a letter, have a look at the Letters section first — I’m planning on getting to work on the next issue quite soon, to try to bring the magazine releases back into better alignment with the seasons! Please send them to editor@new-maps.com by April 1.

Those of you who also follow the Dark Mountain Project can see a bit of cross-pollination beginning between it and this magazine, in the form of two pieces by myself — a new version of my essay “Some Notes on Cartography and Storytelling” from the first issue of New Maps, released online this week; and in the spring print edition (coming in April; no pre-orders yet but subscriptions available), a greatly expanded version of my telling of my summer as a trainhopping Luddite. Dark Mountain’s watchword is “uncivilization,” and as what we know as “civilization” transforms or disintegrates, getting uncivilized is simply good preparation. If that sounds interesting to you, check them out.